I always want to call this camera Nikon KFC, but this Nikon Z-fc. Let's decipher these mysterious letters in the title.

In my opinion, the most revolutionary and noteworthy innovation of this camera is full swivel screen.

For cameras Nikon swivel screen is a rarity. All the reviews focus on the retro design, but the screen deserves no less attention.

Both cameras do not have low-pass filters, which gives outrageous, even - in my opinion - sometimes excessive sharpness of both photos and videos. But these Nikons catch moiré be healthy. In my review on Z50 I showed it.

An important advantage of the Nikon Z50 is a much more comfortable grip. Nikon Z-fc is essentially devoid of a handle.

For a video blogger, a swivel screen is more important than a crank. But for comfortable photography with different optics, grip is very important. With light optics like the standard Nikon Z 28mm f2.8, it will be comfortable even without a handle. It becomes inconvenient with heavy lenses. But you can buy overhead handle and partly correct this problem.

Nikon is scolded for a small assortment of mirrorless optics. But it is not so.

The main criticism is that Nikon has only 3 lenses for the mirrorless crop:

But to them you need to add almost 30 full-frame lenses on the Z-mount. 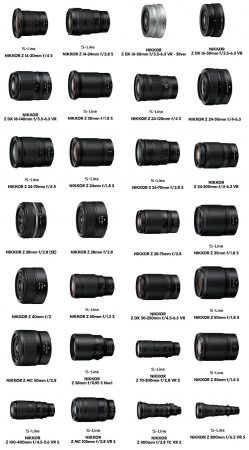 And, of course, through the Nikon FTZ adapter (Nikon F to Nikon Z) - you can use all NIKKOR F-mount lenses, of which there are hundreds on Nikon.

Therefore, to say that there is no choice of lenses for the Nikon Kfc / Z50 is wrong.

The design of the Nikon Z-Fc follows the legendary Nikon FM2, released in 1983. The time difference between them is almost 40 years! This is what these models look like side by side.

Nikon FM2 is a full-frame film reportage camera from the last millennium. The Nikon FM2 camera is remembered for being indestructible. This is a kind of Kalashnikov assault rifle among cameras. Simple and therefore reliable.

Nikon Z-fc is a little scolded for the lack of dust and moisture protection rubber bands. It's petty, really. Nikon FM2 could work without batteries at all. Full mechanics, no electronics. Rather, the battery was still there - for exposure metering. But it was possible to shoot without it, in a completely manual mode. No mirrorless camera can boast of such reliability, no matter how much dust and moisture protection they put in there.

When viewed from the top, both cameras are similar, but the FM2 is a bit chubbier. Do not forget that on the left is a full frame with a mirror, on the right is a crop without a mirror. 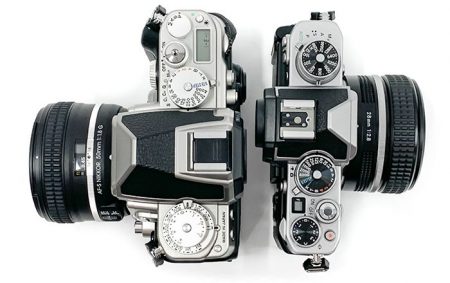 Retro design is an amateur thing. From a practical point of view, this is an outdated and less ergonomic design. But it has its own charm.

Some Nikonists with old cameras asked me on channel questions about Z50, Z-fc. The questions are similar and sound something like:

New crops do not shoot fundamentally more beautiful and better than old crops. The beauty of a photo is 90% dependent on the subject and the quality of the lighting.

On the other hand, new cameras allow you to shoot at higher ISO, there is better color reproduction (it depends on what you compare it to), autofocus is more convenient, they are lighter and more compact, there are better opportunities for video shooting. So upgrade worth of course. But here they do not become a full frame in any way because these models are newer and the mirror was removed there.

When it comes to modern retro cameras, mirrorless cameras from Fujifilm. In Western reviews, this Nikon is compared with Fuji X-T4 or X-T30 II. The previous X-T3 for those reviewers no longer exists ... although this is the same X-T4 with minimal differences.

I think that Z-fc is closest in X-T30 (first, second - it doesn't matter). In terms of weight and dimensions, the Z-fc (445g) is somewhere between the X-T30 (383g) and the X-T3 (539g). But in terms of screen and viewfinder resolution, as well as video bells and whistles, the Nikon Z-fc is still closer to the younger Fuijifilm models. By the way, the X-T30 screen cannot be turned away.

The X-T3/X-T4 have a cooler screen with a viewfinder and these cameras weigh more. These are more advanced models. Both in appearance and performance. Nikon Z-fc, unlike the older Fujifilm, does not have 4K 60fps, Log profile, records in 10bit 4:2:2 and stupid matrix stub from X-T4.

I have not yet tested the Nikon Z-fc on overheat in 4K, but the Fujifilm X-T30 does it pretty fast. The video is very sharp here and there.

But all these cameras are united by TWISTS on the top panel. The design is similar.

I think Nikon has released an interesting and competitive camera. I repeat what I started with, the rotary screen is a force.

It's a pity that Nikon, as always, is lousy with marketing. They put out a really good one blogging camera and just a stylish camera.

But the titles of the reviews on the Internet are rather impersonal:

It is clear from these headings that it is - mirrorless and it has a retro design. Everything. At the same time, Sony trumpeted everywhere about their next stump Sony ZV-E10that this is the BEST CAMERA for blogging in 2021/2022. Simply the best, that's all. In fact - garbage, but what advertising! Nikon is the opposite.

Nikon Z fc - a very decent camera for a wide range of tasks, and reviews about it are dull and insipid. No more hype and “the best camera for bloggers”. So it goes.

In April 2022, the lens was presented Nikkor Z 800mm f/6.3 VR S for mirrorless cameras on the system Nikon Z-mount.

The feature of the novelty is a significant reduction in weight relative to the mirror counterpart Nikon AF-S NIKKOR 800mm f / 5.6E FL ED VR.

In the course of the changes, the new super-telephoto lost a little aperture (f6.3 vs f5.6) and became slightly shorter (by 16%). These results were achieved thanks to the use of a phase Fresnel lens (PF).

The lens is equipped with an optical stabilization system that compensates for 5 exposure levels.

By the way, 800mm is the longest telephoto lens in the Nikon optics line. To see even further, you can use teleconverters and/or shoot in crop mode on full-frame cameras. So, if you wish, you can make a real telescope out of the camera. 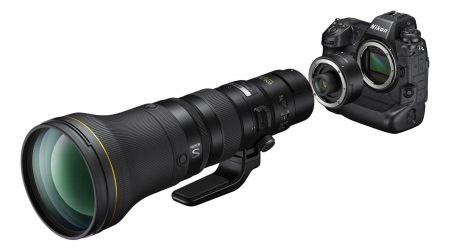 About the lightness of the lens in 2.4kg

In almost all reviews of this lens, they sing odes to it for how light and compact it is. Obviously, Nikon's marketing department woke up and bloggers and news portals were told to convey a key message to the audience - "look how light it is«.

As a result, you can watch another happy blogger running around with Nikon z9 (weight 1340gr) and compact lightweight Nikkor Z 800mm f/6.3 VR S (weight 2,4kg) and repeats how easy it is to hold in your hands. Or a fragile girl to aim at a bird with THIS. Seriously? The camera with a total weight of 3,7 kg is never easy to hold in your hands. You can hardly even stand for 15 minutes with this, tracking down some kind of bird. Yes, the lens in its class has noticeably lost weight. Relative to the previous model - yes, it is easier. But objectively, by that not easy to walk/shoot at all. I can say from my own experience, for such a combo as Canon R5 + Canon EF 100-400mm f4.5-5.6L you can easily shoot for 15-20 minutes, then you really want to take a monopod / tripod. And this is only 2.2kg. Here we are talking about much heavier and overall equipment.

I understand that 800mm is cool, no doubt about it. But anyway, 800mm f/6.3 means using a tripod. If you set the task to shoot hand-held with such a focal length, then you should look to the side Canon RF 800mm f11. With that lens (1260gr) it’s more realistic to walk back and forth and shoot handheld. Of course, there is a big difference between f6.3 and f11 and these are lenses from different categories. However, I have questions about the "lightness" of the optics weighing 2.4kg.

Plus, you should keep in mind that with such a focal length it is difficult aim from hands. It is clear that there is good optical stabilization, it goes without saying for optics of this class. But for 800mm it still begs tripod.

The 800mm prime lens is very specific. Thinking about buying such optics is only for those who know exactly what they will do with it. Scope of application - photo-hunting for birds, small animals, shooting wild animals at a distance, shooting airplanes (spotting). For most other applications, this focal length is excessively long.

All in all, it's great that Nikon develops a line of mirrorless optics. This is good for both the brand and the market as a whole.

Chinese premium optics manufacturer Venus Optics has released 3 existing lenses on other systems for Nikon Z-mount and Canon RF-mount. These are the models:

All of these lenses are non-autofocus. Previously, they could be bought on Sony E-mount, but now users of Nikon and Canon mirrorless cameras can also enjoy high-quality widths.

I previously had review on Laowa 14mm f4 Zero-D and I must admit that the quality of the optics is very high. This lens is optically much better than the new Canon RF 16mm f2.8 or Samyang RF 14mm f2.8. But without autofocus than ultra wide angle can easily sacrifice.

Laowa lenses have established themselves as high quality optics and an adequate alternative to native lenses in various directions.